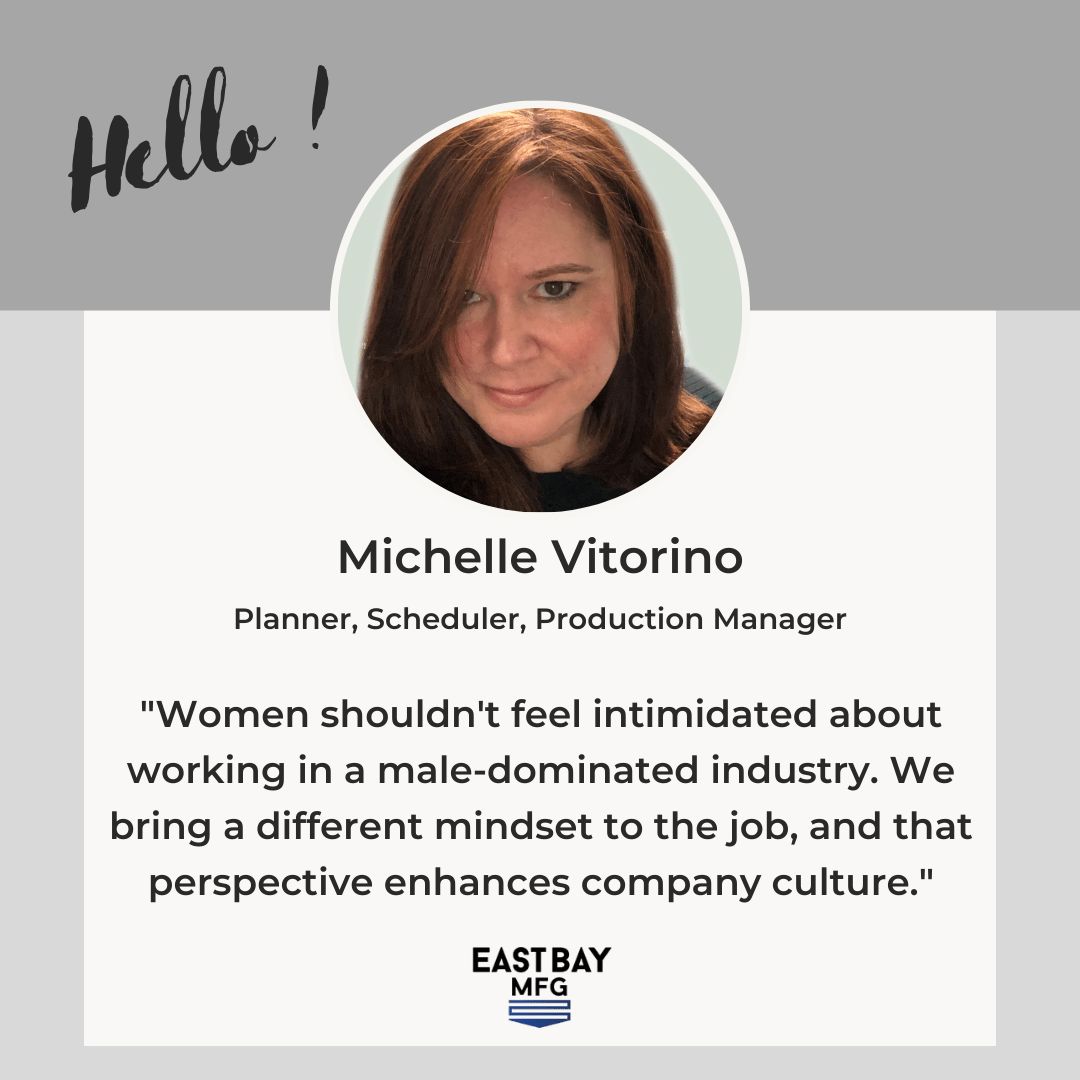 She’s accustomed to rolling up her sleeves, diving in, and getting the job done, just like the iconic Rosie the Riveter of World War II.

“When I started my career, it was in a position generally filled by men,” said Michelle Vitorino, a former manager at a home improvement store.

“I have dealt with people who didn’t want to follow my directions because I was a woman. It was intimidating at first, but I worked hard, kept getting promoted, and eventually became an area operations manager overseeing several stores. Some women I know turned down promotions because they were worried about whether they could do a better job than a man.”

Three years ago, Michelle brought her expertise to East Bay Manufacturers as the Planner, Scheduler, and Production Manager. The company, located in Bristol, Rhode Island, is a precision products manufacturer specializing in sub-assembly, prototype development, machined plastics, and inventory management. They service industries such as medical, technology, industrial, military, and nuclear.

Manufacturing, another industry historically occupied by men, has changed drastically since the 1940s, she said.

“In general, before the war, women were homemakers,” said Michelle. “And now we have women employed in all aspects of manufacturing, from running CNC machines, to office and assembly line work.”

“When you think of manufacturing, you think of it as just making parts, simplified. But until you start working here, you don’t know the intricacies of everything that that entails.”

Making drawings from a concept using computer-aided design software, reading plans, programming the machines, all these steps make up the process of creating a part. Then there’s also knowing the materials being used, she added, such as the composition of aluminum, brass, bronze, alloys, titanium, etc.

“It’s a really cool process to see,” Michelle said. “It’s not the same as manufacturing from our grandfather’s day.”

Michelle’s background in operational management and performing audits was instrumental in East Bay Manufacturing earning and maintaining its ISO 9001 certification.

“The only difference between doing audits at a larger corporation versus here is that I would have to go through 20 different chains or channels to get a process streamlined,” she said. “Here, at East Bay, everyone is accessible, supportive, open to new ideas. And when things need to get done, we can implement them much quicker, and see results much quicker because we are a smaller company.”

Working here has also given her a better work-life balance, she said. As a single mom, Michelle sacrificed a lot of her time with her son when he was growing up because her former retail position had her working late nights and weekends.

“It was tough when everyone in your family is enjoying holidays and three-day weekends, and you’re working,” Michelle said. “If I could do it over, that would be my one thing is to come here and make this my career rather than what I did.”

Investing in Youth for a Sustainable Future

Check out our products at Eastbay Distributors